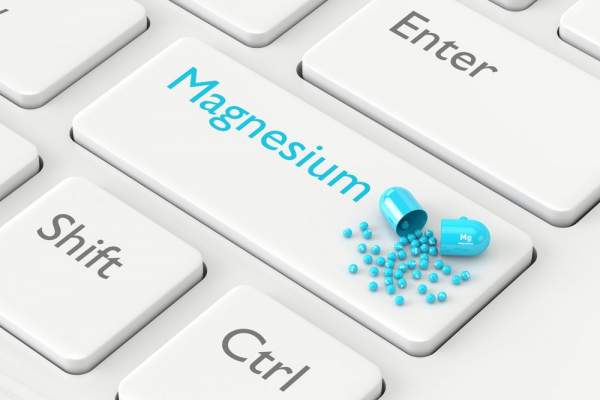 Finding an effective treatment for a migraine can be a challenge. However, something as simple as using magnesium for migraines has been linked together in clinical efforts to help cure and reduce migraine pain by over 40%.

A migraine is a form of severe headache characterized by a reoccurring throbbing head pain which primarily affects only one side of the head. Migraines are usually accompanied by slight visual disturbances and nausea. Sometimes migraine sufferers may experience sensitivity to light or sound or they may vomit.

Approximately a third of migraine sufferers experience an “aura” a short while prior to the onset of a migraine. These auras are a type of visual disturbance.

Magnesium for Migraines: The Connection

Scientists have found that during a migraine attack, low amounts of magnesium are reported in the brain. Since magnesium is also vital to nerve functioning, it was thought there may be a correlation between the two.

At the end, the test group not using magnesium for migraines showed only a 15% reduction in migraines. The group given actual magnesium, however, showed an incredible 41% reduction. This is a fantastic decrease in pain.

Magnesium has been show to provide calmness, and to help with sleep as well. If you have not tried magnesium to help get rid of a headache, you should purchase a magnesium supplement today.

There were low side effects noted in the participants who took magnesium for migraines. 18.6% complained of diarrhea, while another 4.7% complained of general stomach irritation. No other side effects were noted. This is something important to note, as many pharmaceutical treatments do come with a range of side effects.

With one study showing that the theory about magnesium for migraines has some solid scientific background, the question now becomes how to increase you own consumption of this mineral. We’ll talk about supplements later on, but for now we’ll take a look at how you can use your diet to increase your overall magnesium intake.

There are many foods that are high in magnesium, which you can also eat to assimilate this nutrient into you body.

Adding one or two of these to an already well balanced diet can help tip the scales for your intake of magnesium and your migraines will soon be much less. Here is a listing of the most magnesium rich foods:

Other foods that are high in magnesium include: avocados, sweetcorn, milk, yogurt, bananas, dried apricots and dark chocolate can be a part of your migraine diet.

It is sometimes difficult to adjust your diet to be able to incorporate different foods. Therefore, It may be necessary for migraine sufferers to take magnesium supplements in addition to adding magnesium rich foods to their diet. It is recommended to begin by changing your diet first, and after a few weeks, add a supplement after speaking with your general practitioner or neurologist about magnesium for migraines.

The exact amount you’ll be required to take will vary. If you’re worried about how to take this supplement, don’t be concerned, there are many different options available. Adding magnesium by supplement is very easy by swallowing a simple pill or capsule to be effective for migraine headaches.

After having a thorough examination, and talking about various options, your doctor will likely prescribe anywhere between 200 and 800 mg of magnesium, depending upon your body build and exact needs.

Although supplementing magnesium for migraines is normally safe for oral consumption in normally high amounts, it is important to always speak with your doctor prior to taking any supplements.

If you are considered to be in a high risk category, magnesium supplementation may not be safe for you. This includes anyone with a serious health condition, the elderly, the very young, or women who are pregnant, breastfeeding, or plan to become pregnant.

There are certain cases where magnesium intake might be restricted or may need to be monitored more closely.

However, in general it is great to know that using magnesium to treat migraines is a simple and inexpensive way to treat this kind of pain.

If you suffer from other kinds of head pain, especially in your sinuses, you can learn more about sinus headache treatment with this great article.

Migraines and Depression – What’s The Link?